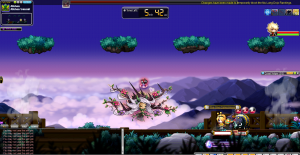 Going through the content of Alishan, gamers have been having trouble kill any mobs. But, during the boss fight with Shao, when she uses the Full Map AoE, it is literally impossible for you to deal with her damage or adds. You damage isn’t nearly high enough to kill any of the mobs that she summons. You could come back later, but it would require you to do the entire train sequence again, and it’s not like you can just magically get new gear that will solve this problem. This should be a slight warning to anyone who has literally no funding at all. You probably won’t be able to do the boss fight unless you are completely inept at playing Maplestory as an entirety, which is a huge possibility. If you’re unfunded and you can kill Shao, good on you. Here’s the problem with this boss: 1. Why the hell should I lose exp every time I die? I know we get free charms but only 3 a day. With how challenging this boss is and how easy it is to die, we shouldn’t lose exp when we die. 1. The level scaling sucks for higher levels. Again I’m level 239 and have around a 700k range. The scaling makes this boss lame as hell. 2. The air that pushes you up is buggy. I have a hard time landing it and when I do, 70% of the time I can’t even land on the platform. You’ll lose EXP if you die (and start over again), so get some Safety Charm. Watch this YouTube video would help a bit:

To Beat Alishan: 1. You spawn on top platform, jump down and attack her a bit 2. She’ll teleport to the left / right side of the screen, and launching 3/4/5 mobs towards you 3. You will die if any of the mob hit you (sometimes they may miss, but don’t take chances) 4. During this process she’s invulnerable, so concentrate on dodging those mobs (flash jump, etc) 5. Although upward wind on the right side of the map can blow you up, it’s uncontrollable, do not use it 6. Once she stop launching mobs, you can attack for a short time, and she’ll teleport again. 7. At one point she’ll teleport into the center of the map and spawn slow moving mobs, those mob can be killed (try dodge, kill them) 8. Repeat dodging process, totally around 4 rounds till you kill her.