FIFA 16 is nearing release and the FUT 16 web app is already working, so its time to look at the quality of the players. With this in mind EA Sports have revealed the first Team of the Week.

Looking at the list, the top player is of course Cristiano Ronaldo who saw success on the pitch with his 8 goals this week. Freddy Guarin has also been included as has Steven Naismith and Dimitri Payet. 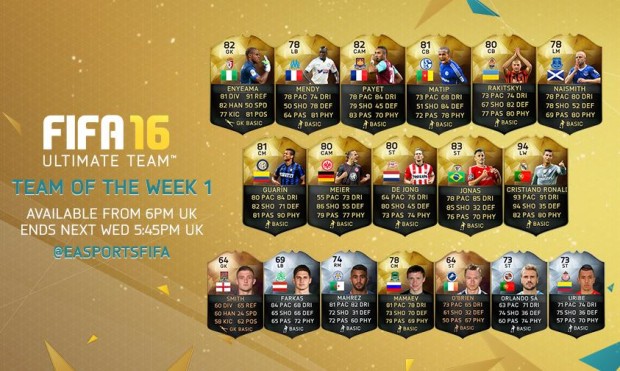 While most people will be expecting to wait until the release day to get their hands on FIFA 16, those with EA Early Access will be playing the game on the Xbox One tomorrow. I’m sure EA are hopeful that they will be all buying their coins and looking to build up their perfect FIFA Ultimate Team.

For the rest of us we’ll have to continue to play the demo and wait just a little more time until the game is finally released. Though I’m sure some may also be looking to PES 2016 which is releasing around the world this week. For those football fans who can afford both games, these are a big few weeks.

I’m sure though for some that can’t afford to buy both, they’ll be torn as to whether to take the plunge and get PES 2016 now, and maybe wait a while longer for FIFA 16. Knowing fan allegiances to these games though, I’m sure that many FIFA fans won’t be even giving a second thought in which game they would rather have.